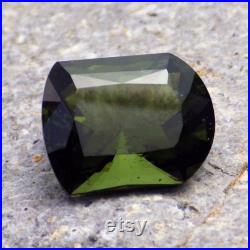 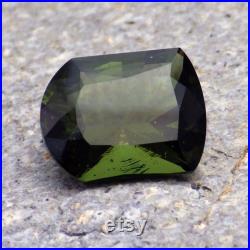 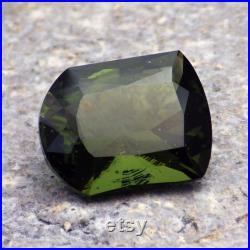 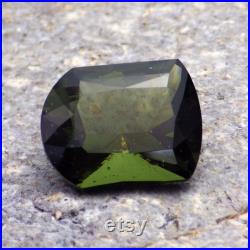 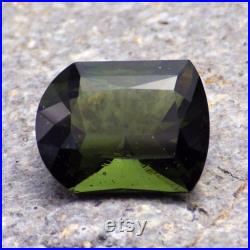 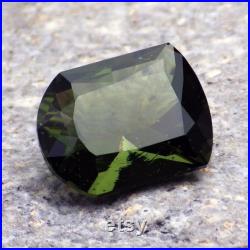 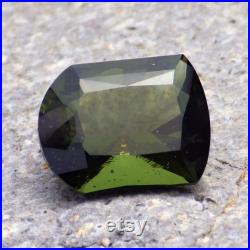 Extremely high investment potential gem on current international market this very rare bohemian moldavite was found at the old famous locality of chlum and selected for its great color and clarity and faceted into top investment gemstone. The chlum sand quarry mine is still producing a fairly good amount of top gem grade moldavite annually and remains the last commercially operated mine. Shapes and colors from this locality strongly resembles the best locenice and besednice stones and are highly suitable for an original jewelry or as a risk free investment. No moldavite is found in any other parts of this world for example indian moldavite, african moldavite, russian moldavite etc.

Solid scientific evidence supporting this fact can be found at any recently published book about tektite and/or moldavite. We have recently run across lot of so called moldavite which was actually green bottle glass broken into pieces and cut into brilliant shapes this is truly awful and totally unprofessional thing to do by some of our direct competitors. The chlum moldavites are becoming increasingly rare as this large commercially operated mine is slowly running out of a good quality stones.

Legend and lore: excellent for helping one to adapt/acclimate to rapid acceleration, assisting one in moving through mental, emotional, and spiritual shifts with greater ease. The "green light" that says go forward into your acceleration/progress, breaking through being held back by the strong gravitational pull of mass consciousness. Offers one a high-frequency, vibrational perspective, assisting/easing the release of heavier thought forms that can keep one bound to material reality. Assist one in remembering their connection to other worlds. According to the oldest european legends these green gems lays below gound all across the bohemian flats (todays czech republic surrounded by mountains in shape of a perfect round impact crater) since times when angel of light was thrown down to the earth by archangel michael.

Hard to belive but these texts were written long before any moldavite was actually discovered. According to all this, moldavites are parts of dragon's (angel of light's) crown jewel.

To support this fact even further, old drawings of dragon / angel of light show him holding a green sphere in his right hand. Origin: chlum sand quarry, southern bohemia, czech republic. The locenice locality belongs to the famous ceske budejovice strew field known to produce the most incredible, fancy sculptured and rarely the snowflake type moldavite used in many original and valued jewelry.

This gem was discovered during summer 2010. Faceted by ravenstein germany in fall 2010. Clarity: clean, glassy clear, except for typical moldavite swirls of molten mass and some small to microscopic bubbles of rare gasses/vacuum captured during the massive meteorite impact or other up to date unexplained cause. Strong swirls of motel mass and small bubbles. Size: 13.6 x 10.5 x 7.7 mm calibrated size: no (the word calibrated means that size of this gem was optimized to fit most inexpensive mass produced jewelry setting). All non-calibrated gems can also be set into jewelry.

Creation of moldavite is linked to a large impact crater in bavaria germany. Facts speaking against this accepted theory are following: 1. All moldavites have encapsulated bubbles of absolute vacuum, therefore could not be produced under regular atmospheric pressure, outer space is therefore more likely true origin of this gemstone. Moldavites are found in many different stream fields and each have different types of moldavite, main differences are in type of color, type of surface sculpturing and types of shapes. If one crater was the true origin, all moldavites would be more or less of same color and similar type of surface.

No moldavites were found anywhere near the actual crater in germany. Ancient war of civilizations accepted by many independent researches, sci-fi team members, writers and many open minded scientists. To support their theory, a very small moldavite-like glassy spheres, drops and other moldavite-like shapes were found after nuclear tests in deserts of nevada the nuclear blast producing moldavite must have been ca. 50.000 times more powerful dawn of civilizations fight of angels moldavites are actual parts of angle of light's crown or crown jewel scattered across the lands after he fell into the ground.

This also explains moldavite's extreme spiritual and high energy healing powers felt by even some untrained people. (old european spiritualist's version). Medieval spiritualist / sorcerers used moldavite during spiritual performances long before it was scientifically discovered in 1890's. Even before this, cavemen in central europe used moldavite as a talisman and/or protector moldavite is also directly linked to the holy grail.

We don't apply radiation, oiling, diffusion and/or heat treatment in order to make low grade material look more expensive we offer 100% natural gems only, no exceptions. This item is made of moldavite and natural moldavite, bohemian moldavite.